ATLANTA, GEORGIA - DECEMBER 28: Quarterback Joe Burrow #9 of the LSU Tigers celebrates a touchdown in the second quarter over the Oklahoma Sooners during the Chick-fil-A Peach Bowl at Mercedes-Benz Stadium on December 28, 2019 in Atlanta, Georgia. (Photo by Todd Kirkland/Getty Images)

Mike McCarthy picked Dallas, but are the Cowboys the right job for him? by Russell S. Baxter
Here’s why Cowboys fans should be thrilled Mike McCarthy got hired by John Buhler

Here’s what Joe Burrow, Ed Orgeron and the LSU Tigers need to do in the National Championship Game if they’re going to beat Clemson.

LSU is one win away from its first national title since 2011. Standing in their way are the reigning national champion Clemson Tigers who are playing for their third championship in four years.

Heisman Trophy winner Joe Burrow and LSU are 5.5-point favorites over Trevor Lawrence, Travis Etienne and the Tigers from the “other” Death Valley.

In what will almost be a home game for Ed Orgeron’s LSU, playing in New Orleans with everything on the line. Here are five keys for the LSU Tigers to beat the Clemson Tigers, and walk away from the Mercedes-Benz Superdome as national champs.

5. DBU will have to (try) to control Trevor Lawrence

Not enough can be said about how crucial the LSU secondary has been in the 2019 season.

Kristian Fulton, Derek Stingley Jr.and Grant Delpit combined to anchor the back half of the LSU defense all season, putting in some impressive performances along the way. They still have yet to face anyone as talented as Clemson’s Trevor Lawrence and the dynamic group of receivers he has at his disposal.

In a matchup between two teams that have this much talent, the focus will be on the performance of the star quarterbacks, Burrow and Lawrence. The performance from the LSU secondary will have to be top-notch, and potentially even their best yet in order to slow down Lawrence and his group of receivers.

4. K’Lavon Chaisson and the defensive line have to contain Travis Etienne

Though perhaps not as highly-touted as starlet sophomore Lawrence, Etienne plays an equally important part in the offense. It’s likely Clemson will want to eat up as much clock as possible, in order to keep the prolific LSU offense off the field.

A large part of that strategy will come in the running department, and though Lawrence is mobile, most of this is going to fall on the shoulders of Etienne, who has been fabulous this season. He currently ranks in the top 10 in rushing yards, yards per carry and rushing touchdowns.

The LSU side is in luck, however, as even with how heralded their secondary has been, their defensive line and linebacker core have put in equally impressive performances. K’Lavon Chaisson leads LSU with 6.5 sacks and JaCoby Stevens is second with five. They face a tough test in managing to not only contain Etienne, who is a home-run threat on almost every down but also getting pressure on Lawrence in the passing game.

3. The National Championship has to be the best game for the two Louisiana Joes—Burrow and Brady

To win the National Championship Game your best player has to play like he’s your best player. That starts with Burrow and with Broyles Award winner as the nation’s best assistant coach, Joe Brady.

Burrow will have to be at his best to dissect the Clemson defense, as he’ll be going head to head with another player who is one of college football’s best in the Swiss army knife, Isaiah Simmons.

The Clemson secondary has 17 interceptions on the season, with six of those going to talented their talented safeties in Tanner Muse and K’Von Wallace, both of whom project to having futures at the NFL level.  Wallace leads the team in passes defended, with 10 passes broken up on the season so far.

The game plan will have to be nearly perfect, and the execution even more so. It’s up to Burrow, Brady and offensive coordinator Steve Ensminger to put together their most effective game of the season against Clemson.

2. Lloyd Cushenberry and the LSU offensive line have to control the game

Clemson has a good defense—make them show it for an extended amount of time.

Though Clemson lost a lot last year to the NFL Draft, Simmons is still an incredible player, recording six sacks for 41 yards and a whopping 97 total tackles thanks to a unique ability to play in just about any spot on the defense. Clemson has five players at or over the 3.5 sack total, with the team also registering a total of 19 interceptions on the season.

For Burrow to be at his best, Cushenberry and his line will have to stop Simmons, and give college football’s best quarterback enough time to dissect the Clemson secondary and find his talented group of wide receivers.

Perhaps the most important key. The entire Fiesta Bowl, Ohio State gave up opportunities, and Clemson made them pay for it.

Ed Orgeron has a different track record and has already laid claim to beating one of the greatest coaches in college football history en route to where his LSU Tigers are now. His Tigers bested the Alabama Crimson Tide in an insanely fun 46-41 match up back on Nov. 9. He’ll be looking to best the man who arguably sits at No. 2 when he takes on Clemson’s Dabo Swinney.

From his mannerisms and calm responses in press conferences to his on-field demeanor that consists of ruthless play-calling, Swinney is one of the best there is. That fact is only magnified when it comes to being in high-pressure situations. 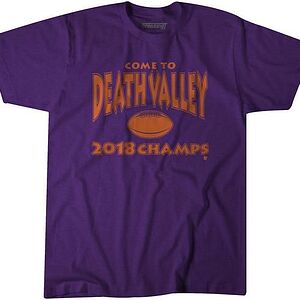 The highest-pressure situation of all is exactly what both teams face when they head into the Superdome in New Orleans. With high pressure, not only comes good games (usually), but also comes nerves, and with nerves can come mistakes.

Though the same could be made on the flip side for Swinney’s team, these mistakes, especially the mental ones, are things you can’t afford when you play a team with all-around quality like Clemson. Any re-watch of Clemson’s narrow Fiesta Bowl win over Ohio State will show that if a mistake is made—Swinney’s Clemson will make you pay. The Tigers have to avoid that if they want to be victorious.

It’s always a humorous thing, breaking down keys to a game—as many of these keys apply for the Clemson Tigers as well. The matchup in the Superdome is bound to be an exciting one, and football fans of every rooting interest are in for a treat as these two mountains of talent go head-to-head.

Next: 50 greatest college football teams of all time